Oral tumors constitute about 6% of the overall incidence of cancer in dogs and cats. The most important thing to know about oral tumors is that early detection is key to successful treatment. This is one of the reasons why regular oral examinations, especially as your dog or cat ages, are extremely important.

* NOTE: Any abnormal growth of tissue in the mouth (or otherwise) requires biopsy for definitive diagnosis. Although a confident clinical impression can be obtained from an examination and x-rays, final diagnosis cannot be made with the opinion of a pathologist. At ADOS, we use pathologists that specialize solely in oral diseases. Additionally, we send radiographs, Cone Beam CT images, and clinical pictures with our biopsy samples so that the pathologist has an in-depth clinical picture of the tumor.

Due to the large variety and number of oral tumors that can be present in our dogs and cats, only the most common types will be covered in this article. For simplification, they are characterized into benign and malignant tumors below.

The word benign is defined as something that is not harmful. When directly related to tumors/cancer, benign is equated to not being malignant, or “dangerous/virulent.” While benign oral tumors are understandably less “scary” and often more treatable than malignant tumors, they should still be treated promptly. Even benign oral tumors often continue to grow, and unhampered growth can eventually lead to difficulty eating and chewing and destruction of local tissues. Prompt treatment equates to less aggressive surgery and a higher chance at surgical cure. We will explore some different types of benign oral tumors below. This list is not meant to be exhaustive, but rather to provide a general overview of common benign oral tumors.

Gingival hyperplasia, or focal fibrous hyperplasia (FFH), is a benign proliferation of the gingiva around the teeth. Boxers carry a strong genetic predisposition for this disease, but any breed of dog can be affected. Additionally, there are drugs that can cause excessive gingival growth, including anti-seizure medication, immune-suppressive medication, and calcium-channel blockers used for heart disease. Although FFH is a benign proliferation of tissue, excessive gingiva creates “pseudo-pockets” of disease, meaning that plaque bacteria gain entrance under the abnormally large gumline and congregate around the teeth, predisposing to periodontal disease.

Treatment involves restoring a normal anatomy by removing the excessive gingival tissue. A normal margin of gingiva needs to remain around the teeth, so it is important that this procedure is performed with care and knowledge of dental anatomy. Surgically, there are many different ways to approach removal of this excessive tissue, including the use of laser, surgical blades, fluted burs, and electrocautery. The method of removal does not matter as much as the proficiency of the operator using the equipment. Laser, electrocautery, and bur use can cause damage to the teeth, so these should to be used with care. Regardless of method employed, healing following surgeries of this nature occurs quickly. 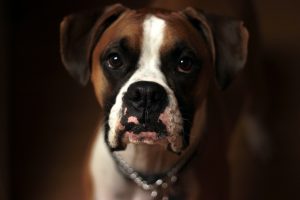 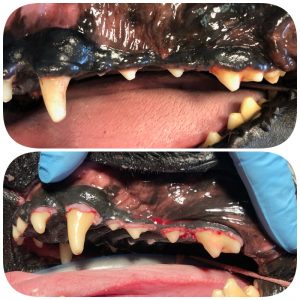 Pre (top) and post (bottom) operative pictures of treatment of FFH in a dog with a surgical blade and fluted bur. 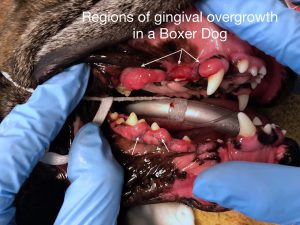 This is a type of tumor that was previously referred to as an “epulis,” or a growth associated with dental structures. As pathologists delved into oral pathology more thoroughly in recent years, they realized that “epulis” was an over-simplified definition, and as such, it went out of favor. Instead, there are now more structured definitions of the previously classified “epulides”, and POF is one of those. POF is a very treatable type of gingival tumor that arises from dental structures and often presents as a proliferative mass of gingiva that appears “quiet” on oral exam, i.e. lacks ulceration or inflammation. Additionally, these often have calcification within the tumor on radiographs, which is a tell-tale or “pathognomonic” sign of a POF.

The treatment of POF varies based on location and type of attachment to the underlying tissue. Removal can involve either simple marginal excision of the visible tumor itself or excision of the tumor along with the underlying dentition. Generally speaking, the former treatment option is more likely to result in recurrence while more aggressive resection with associated dentition is curative. 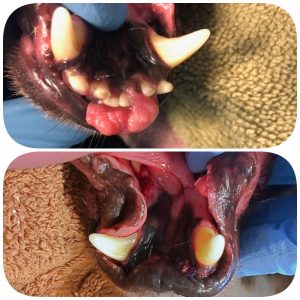 A POF tumor on the lower jaw of a dog. The picture lower picture shows the appearance of the jaw after the tumor and associated teeth were removed. 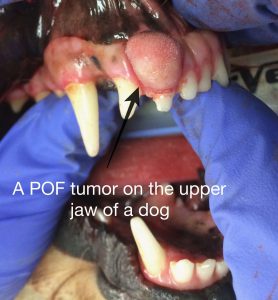 This tumor used to be called an “Acanthomatous Epulis” and is sometimes still labeled as such. Although technically a “benign” tumor, this is a very serious, locally aggressive oral tumor that invades into bone and therefore requires aggressive surgical treatment.

CAA often presents as a red, raised gingival mass that can be quite impressive in its proliferation and inflammation. CAA, unlike POF, can (and often does) invade underlying bone. Think of the visible component of the mass like the tip of the iceberg- what you can see is likely only a small portion of the mass.

Aggressive surgical removal with appropriate margins results in a cure for CAA. This involves removal of bone, and for the larger masses, this can require a fairly large surgery to remove the entire tumor, i.e. removal of a portion of the upper (maxilla) or lower (mandible) jaw bones. While this seems excessive and aggressive to some, this approach often results in a cure and no further treatment is required. The aggressiveness of the surgery and the amount of bone removed are all determined by the location and invasiveness of the tumor, determined through anesthetized oral exam, dental radiographs, and/or CT scan. 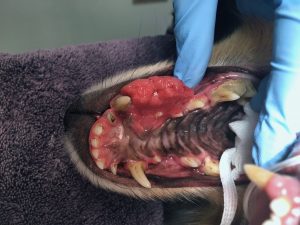 Example of a large Acanthomatous Ameloblastoma in the upper jaw of a Sheltie.

SCC is one of the two most common oral tumors we see in dogs and the most common oral tumor that we see in cats. It often presents as a rapidly growing pink fleshy mass associated with the gingiva (gums), oral mucosa, or tongue. SCC can also be found on the tonsils as part of an anesthetized oral examination. SCC characteristically invades bone and is therefore considered a locally invasive tumor.

In dogs, the location of SCC can help us to predict its behavior. SCC in the rostral (front) part of the oral cavity is unlikely to spread to other parts of the body and as such, can often be treated with aggressive surgical excision and a cure can be achieved. However, when we see SCC located in the caudal (back) regions of the mouth or in or around the tonsils, spread (metastasis) is more likely, and ancillary treatments like radiation or chemotherapy are often required.

In cats, SCC is more difficult to treat because of how small cats are and how invasive the tumors can be. Additionally, the tumors are often not noticed until they are a large size because cats are very good at hiding signs of oral disease. Surgical removal is always the best course of action for these tumors when possible, but ancillary treatments like radiation are also commonly employed in cats.

Melanoma is a term familiar to many people as it is common in the human species as well. MM is the second most common oral tumor that we see in dogs. MM is often seen as a pigmented tumor affecting any portion of the mouth, including the gingiva, oral mucosa, or tongue. However, there is an amelanotic version that lacks pigment, so lack of dark color does not rule-out melanoma. MM tends to be aggressive. It is locally invasive, invades bone grows quickly, and has a high potential for metastasis.

Treatment of MM should involve a veterinary oncologist and all treatment options should be explored before a decision is made on whether surgery is appropriate to pursue. Options might include radiation, chemotherapy, and the melanoma vaccine, but surgical removal of the disease and local lymph nodes is generally a mainstay of treatment.

Do NOT follow this link or you will be banned from the site!