SCC is the most common oral tumors we see in cats. It often presents as a rapidly growing pink fleshy mass associated with the gingiva (gums), oral mucosa, or tongue. SCC characteristically invades bone and has often caused a large amount of bone destruction by the time it is diagnosed. Alternatively, we also commonly find it under the tongue, where it can go undetected until the cat is unable to eat and drink properly. Unfortunately, there is currently no reasonable long-term way to control this disease and survival rates are therefore very low (generally 3 months or less after diagnosis). In one report, 1-year survival was less than 10% despite all treatment efforts made with surgery, chemotherapy, and radiation. This tumor is not known to commonly metastasize (spread to other parts of the body), but true metastatic rate is likely unknown due to the fact that most cats succumb to their local disease rapidly.

Treatment with local surgical resection is the most effective treatment for feline oral SCC (as for all other oral tumors), but the small size of cats and the large amount of bone loss at diagnosis often makes surgical control difficult or impossible. Cats have been shown to do poorly after removal of large portions of their tongue or jaws as they often have difficulty regaining the ability to eat, drink, and groom after these surgeries. However, if the tumor is identified early or has discrete margins, removal might be possible.

Studies into novel treatments of this aggressive and difficult to treat disease in cats are ongoing. We will do our best to post updates as we find them. 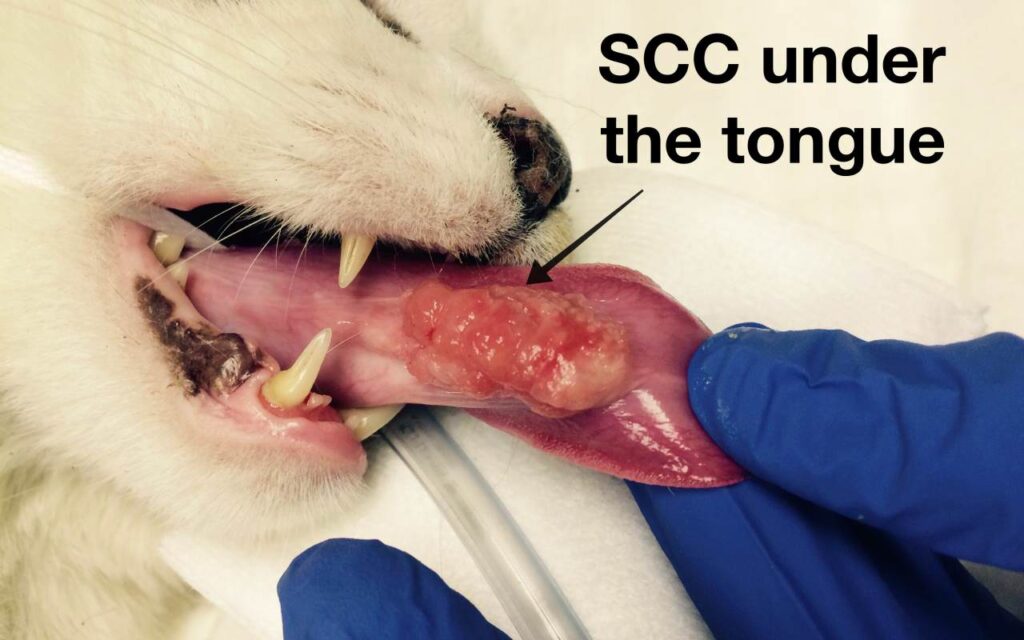